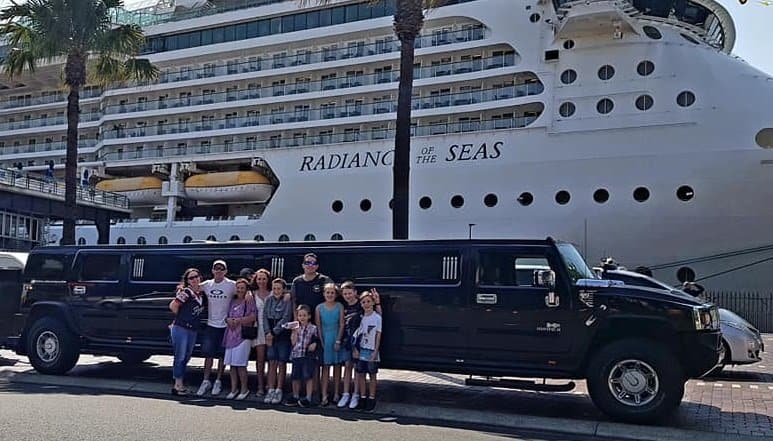 Traveling via cruise ship is just another way to see the world, but there is a lot to think about when planning a cruise, especially if it’s your first time. From picking a destination that interests you, finding the right cruise line, booking transfers, and everything in between. While we do not offer all services for your vacation, we are experts at arranging your transportation and limo service from Orlando International Airport to Port Canaveral.

Exquisite Town Car has the expertise and has been providing Port Canaveral limo service to our clients for more than a decade. We know how to ensure your journey to your cruise ship is comfortable, convenient and hassle-free.

We offer limo service from and to all the nearby airports around Orlando and Port Canaveral. Below you may find the airports we service

Limo Availability from anywhere in Orlando

Our limo service is not only available from the airport. You can also book a limousine with us and request to be picked up from any location in Central Florida. We provide services from Orlando International Airport, Sanford International Airport, or any other hotels in Disney or Orlando Area. Our experience is extensive in providing magical transportation from anywhere in Orlando to Port Canaveral.

To provide you further clarity and different options, we have extensively provided some valuable information below, which will assist you in making your limo reservation easier.

A unique advantage to Port Canaveral is the convenience of providing visitors an elongated vacation. Visitors can combine a cruise vacation along with a visit to the Orlando theme parks and Space Coast attractions such as Kennedy Space Center. The vacation provides value for money with two vacations and twice the fun for the price of one!

We can provide you with many options to choose from

As per your preference and the number of passengers traveling together, you can choose the vehicle.

Why Exquisite Town Car should be your choice for Limo Service

Briefly below we have shared the differences and price comparison for all the different options you have for your Port Canaveral limo service.

Shared shuttles are most cost-effective solution if you are on a budget and comfortable riding with strangers. If you are not time constrained and do not mind waiting for people you don’t know, they you can opt in. However, the option only works best if you are a couple. In the case of a family of 4 or more, you may end up paying way more than hiring a private car service.

The cost for a taxi from any Disney World, SeaWorld or Universal Area hotel to Port Canaveral is by far the most expensive option of any transportation alternative (and their quotes don’t include tolls along the route or the driver’s tip).

A taxi ride is metered and you never know what can follow on an hour’s drive. Furthermore, a straight off taxi ride to Port Canaveral will cost you anywhere between USD 80 to USD 120 plus tolls. Additionally, you will not be able to use this service if you are a party of 6-7 people with heavy luggage. You may have to hire a private chauffeured limo service to Port Canaveral. The limo service companies have larger vans which can easily accommodate up to 12 people with luggage.

Knowing the reality and having been in this industry for last 15 years, we have learnt from speaking to hundreds of clients. The private limo service to Port Canaveral works as the best option. It is generally the most comfortable and efficient way to travel. You’ll have the entire vehicle just for your family or group. You can enjoy the privacy and can book a car that best fits you and your family’s needs.

How far in advance should we make a reservation with exquisite town car?

On the day of our disembarkation from the ship, our flight doesn’t leave until late enough in the afternoon. Do we have enough time to check out any of the area attractions?

It all depends on when can you exit the ship. If you can come out of the ship round 9:00 AM, it gives you some time to see the Kennedy Space Center, but you may not be able to explore it completely. You can probably enjoy a lunch at Cocoa Beach or shop around a bit. If your flight leaves later in the evening, that gives you a bit more room to roam about and explore theme parks such as Universal Studios or Sea World. Give us a call if you’re not sure and we’ll help you plan.

We have an early flight on the way back home after the cruise and we’re worried about not making our flight in time. Do you have any suggestions as to how to make sure we can exit the ship in a timely manner?

In this case, you must speak to the cruise line staff and ask for what is known as Self Assist Disembarkation. It may not be applicable on all ships so be sure to check with the cruise line beforehand. It also helps to have your baggage packed and ready well before the ship docks. If you find yourself with less than 3 hours to get to your flight after disembarkation, the chances of missing your flight can increase due to any number of extraneous circumstances.